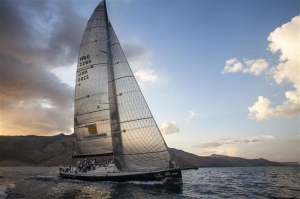 If you’re looking to expand your racing horizons, then competing in the Rolex China Sea Race is a great place to start. The South China Sea has been recognised as one of the most beautiful and challenging stretches since the days when tea clippers raced down the China Sea bound for London. Arriving home in the Thames, skippers would speak with awe about the azure waters of the China Sea, speckled with a maze of beautiful islands and reefs. They would also shudder at the memory of the fierce currents and unpredictable squalls that would catch out the unwary sailor.

Not much has changed today and the Rolex China Sea Race remains one of the most exciting, exotic and challenging races on the RORC calendar. The event is held biennially and runs between Hong Kong and Subic Bay in the Philippines. The 565 mile course gives skippers and crew the chance to pit their wits not only against some of the finest yachtsmen around, but also the vagaries of the SW monsoon, which starts to kick in during April.

This is a spectacular racecourse and offers racing in a very different forum from that usually experienced by European sailors. Run by the Royal Hong Kong Yacht Club, the race has a rich history, with the inaugural event being held in 1962. Since then, the competition has developed and grown and, having been recognised by RORC as early in 1972, is held in high esteem by the international racing community and this esteem was fully confirmed in 2008 when sponsors Rolex added the event to its prestigious portfolio of international yacht racing events.

With this in mind, you can guarantee the event attracts a fleet of well-honed racing machines, while the standard of sailors competing is also top notch. The race is open to offshore racing and cruising yachts with valid IRC certificates.