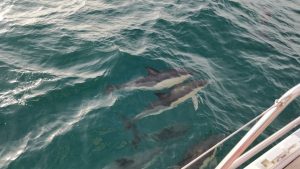 Part One:  Dolphins Crepes and Baguettes:

It  was a bold decision to schedule a channel crossing for late October, optimism often pays dividends when it comes to sailing experiences and the long Indian summer  arrived in style!  With a big high sitting over the UK and the continent, a moderate breeze, calm seas and an eager crew off we set for the French coast from our base at Port Hamble at 8pm after all the crew had arrived from work in London and Hampshire.

With crew introductions out of the way ‘Are you on ‘Saving Lives at Sea’ Callum says to Altaf who sheepishly identifies himself as one of the RNLI crew at the Thames Lifeboat station (the busiest lifeguard  post in Europe),  Altaf runs through the safety demonstration onboard the imposing Hanse 540 yacht ‘Saga’- Nice safety brief Al!

Lines cast and fenders in Lee is handed the helm from the set off and successfully navigated us through the Solent and over a few sand banks with good high tide clearances whilst Callum was spotting crab pots on the bow ‘’ Crab Pot Port Side’’ nicely done Callum good spot, that was a close one! With the gas BBQ primed at the stern we tucked into burgers and jerk chicken on route towards The Needles lighthouse as the Westerly end of the Solent beckoned riding the tidal drift.

11pm with Callum on the helm now we shoot out of the Solent past Hurst Castle and around the Needles  before setting our direct course to Cherbourg. A watch system is discussed and we settle on 3 hour watches with Altaf skipper as he’s keen to put his yachtmaster into practice and as volunteer for the RNLI is always looking for an opportunity to hone his safety management skills. Spinnaker up a beautiful clear sky perfect breeze and warm night we cruise across the channel averaging 6 and 7knts under sail tracking our 85 mile course to the continent.

Fishing lines out Orlando forever the optimist toils away with the lines but alas the only sea life action was to be a massive pod of dolphins converging on us from all directions at sunrise, we counted 11, 12 , 15 all having a turn on the bow diving and playing and spinning around.. what a delight to see these fantastic majestic creatures, masters of the ocean enjoying the channel waters  and our boat speed.

Saying goodbye to our dolphin friends we headed for the ever more larger hills of Normandy being pulled stronger and stronger along by the spinnaker before pulling in the sock and doing a sail change to get a better tack for Cherbourg ETA 11am.  Arriving in Cherbourg we moor on the visitors pontoon and immediately hit the town looking for FOOD. We fill ourselves up at a French creperie whilst talking about all the local delicacies yet to sample later in the day, TripAdvisor recommends this restaurant, no that one looks delicious, what about this local seafood market!

After resting back at the yacht it’s a 2nd rampage through the town centre where local produce is purchased as though we were staying for a week before finally deciding to set back across channel at sunset and cook our own seafood pasta with local muscles, prawns and crayfish .. nice job Chef Altaf you’re hired!!